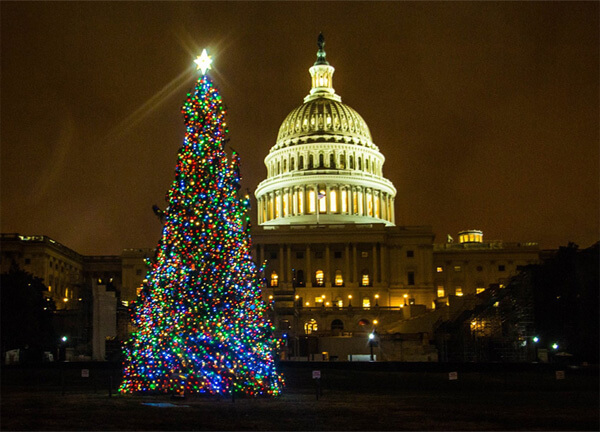 WASHINGTON, D.C., Dec. 7, 2016 – After a 4,000-mile, three-week journey, the U.S. Capitol Christmas Tree came to life in a special ceremony attended by hundreds of people Tuesday evening (Dec. 6) on the Capitol’s West Lawn.

The 80-foot Englemann spruce, adorned with thousands of LED lights and about 4,000 ornaments hand-made by Idaho children, was lit by Speaker of the House Paul Ryan (R-Wis.), accompanied by Isabella Gerard, a fifth-grade student from Boise, Idaho. After being harvested on Nov. 2 in the Payette National Forest in Idaho, the tree was transported by a specially-decaled Kenworth T680 from McCall, Idaho, to more than a dozen stops in the state, including the driver’s hometown of Twin Falls, before heading to the nation’s capital.

The tour truck was escorted for most of the trip by the Big Idaho Potato Truck, a Kenworth T680 hauling a 6-ton, 28-foot long replica of an Idaho russet potato. The hollow potato carried commemorative ornaments sold at tour stops along the way to benefit various organizations that encourage youth to spend time outdoors, including Payette Children’s Forest.

This year marks the 52nd anniversary of the traditional Capitol Hill Christmas Tree ceremony, which was first begun by U.S. House Speaker John W. McCormack in 1964. The tour attracted thousands of visitors at 31 scheduled stops during its trip.

“This year’s U.S. Capitol Christmas Tree Tour provided some great memories for adults and children,” said Kurt Swihart, Kenworth marketing director. “A special thanks goes to Gary Amoth and his Kenworth T680 for safely transporting ‘The People’s Tree’ to its final destination, where it will be enjoyed throughout this special time of year. We’re proud that the Big Idaho® Potato Truck, also a Kenworth T680 with 76-inch sleeper, assisted in the trip to Washington, D.C.”