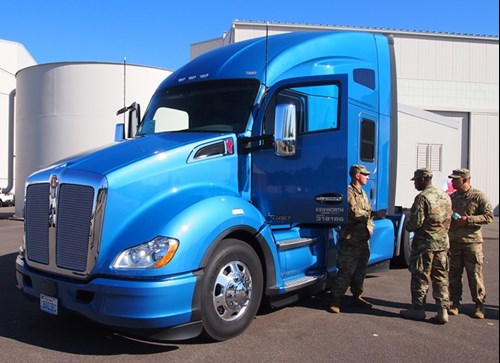 JOINT BASE LEWIS-MCCHORD, Wash., Oct. 18, 2017 – More than a thousand service personnel and their spouses took part in career development programs and learned more about their post-military career opportunities at a Hiring Our Heroes Transition Summit held over three days at several area military and veteran support facilities.

The summit, coordinated by the U.S. Chamber of Commerce Foundation’s Hiring Our Heroes Program, USAA and the Military Officers Association of America Military Family Initiative, concluded at Joint Base Lewis-McChord (JBLM) with interactive panel discussions and a hiring fair.

At the hiring fair, transitioning service personnel got a closer look at a Kenworth T680 equipped with a 76-inch sleeper and the PACCAR MX-13 engine – the top award in the Transition Trucking – Driving for Excellence top rookie military driver recognition program. Kenworth has teamed up with the FASTPORT Trucking Track Mentoring Program and the Hiring our Heroes Program to find America’s top rookie military veteran who has successfully transitioned from active duty to driving trucks.

One of the three award finalists announced in August will be driving a similarly equipped T680 next year courtesy of Kenworth. The top three finalists, with their branches of service and employers, are: Wayne Roy (Marine Corps/U.S. Xpress), Daniel Shonebarger (Navy/Melton Truck Lines), and Gregg Softy (Army/Stevens Transport).

Kenworth displayed the fully-loaded T680 to encourage transitioning service members to explore trucking industry opportunities at hiring summits held across the country. When it came to Sgt. Christopher Brown, the T680 achieved its mission. When he leaves the Army, Brown said he hopes for an opportunity to work on one. “I want to work on Kenworth trucks, and I want to work directly for Kenworth,” he said.

U.S. Army Spc. Christopher Jarrett also found the T680 impressive. “My dad drove trucks for years. This truck is much nicer than any of the ones he drove. It offers so much headroom and the ride is unbelievable,” Jarrett said.

For the second consecutive year, Kenworth is donating a T680 to the program.

“We have seen this program provide great benefits not only for our nation’s soldiers and veterans, but also for the trucking industry. These servicemen and servicewomen are highly trained professionals with transferable skills that can greatly benefit employers. They just need guidance and the right opportunities with private sector companies that can best utilize their unique training and skills,” said Kurt Swihart, Kenworth marketing director.

“Kenworth’s involvement provides them not only a glimpse of the opportunities available to them in the trucking industry, but also a hands-on look at the technological innovations made in truck and powertrain design and manufacturing,” Swihart added. “By seeing those things in person, soldiers like Sgt. Brown and Sgt. Garrett can more easily identify the job and career opportunities that closely match their own skill sets and experiences.”

Brian Matters, a design engineer with Kenworth and a former U.S. Army service member and combat veteran, agrees. Matters took part in the hiring summit as the company’s ambassador to transitioning service members. “I was thrilled to do it. I wanted to provide service members with help to avoid some of the experiences I had,” he said.

Matters said when he left the U.S. Army in 2008 following his second 4-year enlistment and tour of duty as a combat medic in Afghanistan, his transition from military service was more difficult than he had expected.

“As a transitioning service member, you’re leaving behind a very different lifestyle where everything is regimented and disciplined and most of your needs are met by the military,” he said. “There’s this massive gap between how things are done in the military and how things are done in civilian life. For some transitioning service members trying to make the jump from military to civilian life can be a pretty scary experience. After all, you’re jumping into the unknown.”

Matters recalls the difficulty he had with his own initial job search.

“Even though I sent out dozens of resumes, nobody seemed to want to hire me when they saw my experience,” he said. Before he served as a combat medic, Matters played the flute and piccolo in the U.S. Army Band during his first enlistment. Matters said he learned how to drive a 10-speed tractor, service vehicles and run a variety of computer equipment and cyber technologies. Even still, prospective employers often may find it challenging to understand how military-related roles can transfer to relevant jobs and tasks in industry, he noted.

Matters said he feels fortunate the G.I. Bill allowed him to go back to school and study mechanical engineering at the University of Washington. After graduation with a B.S. degree in 2013, Matters landed a job at Kenworth, composing chassis layouts and designing components for various applications.

“The G.I. Bill allowed me to become an engineer and work for a company that makes veteran support a high priority,” he said. “I am proud Kenworth has taken such an active role in these summits, and that two well-deserving military veterans are on PACCAR corporate fellowships.”