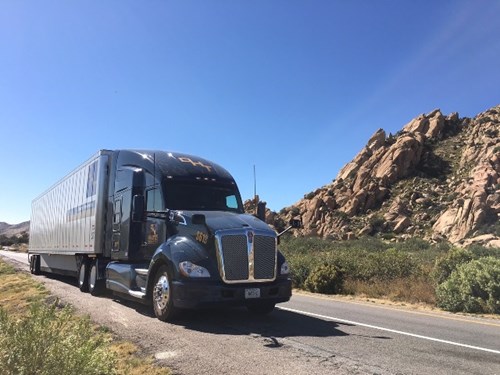 MOUNTAIN CITY, Tenn., Sept. 28, 2017 – Before Ronnie Miller hired on with Danny Herman trucking in 2012, he told Joe Herman a little bit about himself. “I told him I was a Kenworth man. That’s all I drove as an owner operator during my 28 years, and that’s all I want to drive now,” Miller reminisced with a chuckle. “And that’s what the company offered me – I was pretty happy. Now, I’m driving a Kenworth T680 – it’s my third one; I get a new one to drive every 300,000 miles. When Kenworth says it builds ‘The Driver’s Truck,’ I agree wholeheartedly with that.”

Now in his fifth year with the company, Miller drives team with his wife, Margaret. The couple is one of 100 driver teams who run with Danny Herman Trucking. The Tennessee-based company operates 405 power units – all but a few are Kenworth T680s with 76-inch sleepers. The T680s are powered by the PACCAR MX-13 engine, rated at 455 horsepower, and driven through an Eaton Fuller 10-speed automated transmission. The trucks were purchased through MHC Kenworth in Kingsport, Tennessee.

With more than 1,100 trailers, the carrier hauls dry-van loads out of the Midwest to the West, and Southeast regions of the country. According to Joe Herman, who purchased the company from his dad, Danny, in 1999, the company has long been a Kenworth fan. “My dad started the company with one truck in 1964 – and that was a 1946 Kenworth.”

Since then, the company has been primarily running the latest model from Kenworth, transitioning to the T680 from the Kenworth T700 in 2013. “The trucks we offer to our drivers do make a difference, as does our family atmosphere and culture,” said Herman. “We have assigned driver managers so they develop a relationship with our drivers. And, we’re a faith-based company and run our business in a fashion that brings honor to God. We’re honest and strive for excellence. When you come into our terminal, we know your name and treat people the way we’d like to be treated. All of this makes a difference. Our driver turnover is well below the industry average.”

Solo drivers for Danny Herman are out for the long haul – most average 10 to 14 days on the road at a time, and log up to 140,000 miles a year.  The average lane is 1,475 miles one-way. “Our team drivers are averaging up to 250,000 miles a year, and we’re trying to get our ratio up to about 30 percent team drivers,” said Herman. “This will increase our vehicle utilization and allow us to run more miles handling more urgent loads. It’s a service we continue to market to our customers. When we decided on the T680, we knew it had the space drivers needed for extended hauls – that it would be a great truck for solo and driver teams.”

Danny Herman’s T680s with 76-inch sleepers feature The Driver’s Studio with a range of premium features that offer a relaxing and comfortable living environment. For eating meals, there’s the 180-degree swivel passenger seat and rotating table to accommodate two people, a drawer-style refrigerator and a convenient space ideal for a microwave. A swivel TV mount is ideal for flat screen TVs up to 28 inches, and convenient LED lighting provides ample interior light throughout the sleeper. There’s also a full-size wardrobe space for hanging clothes, multiple storage drawers, and a large storage space under the lower bunk. And when it’s time to get some restful sleep, there’s the 8-inch thick, pocket coil mattress.

For Ronnie and Margaret Miller, the team miles add up to between 1,000 and 1,200 each day. “And we’re out five to seven weeks at a time,” said Ronnie. “The T680 is our home. It has superb  handling, and it’s very quiet with excellent pulling power. The fuel mileage is great as well – we always get our fuel bonus. With all the room in the sleeper, it makes for a great team truck.”

Bob McDonald, a 21-year driving veteran, is a solo driver for Danny Herman, and is out for eight- to 10 weeks at a time in his Kenworth T680 and logs an average of 13,000 miles a month. “I love the truck and how it gives you a feel for the road,” he said. “I’m in this truck every night and I’ll brag about it to no end. It’s the best truck I’ve ever driven and I’m relaxed at the end of the day. I’ve had numerous drivers ask me about the T680, and I tell them all about it. My reports on the truck convinced a husband/wife team to go to work for our company. Trucks do make a difference to drivers; it makes a big difference in recruiting.”

As for the future, Joe Herman said the company plans to just keep on trucking and doing it safely. “Our drivers are our most important asset,” he said. “We invest in our people and in training and that’s reflected in winning the top safety award from the Tennessee Trucking Association (in the 3 million- to 7 million-mile category driven in Tennessee). “But, we don’t want to grow so fast that we’ll lose our culture,” he said. “In five to six years, we expect to be up to 650 trucks. We’re on a good pace right now.”

*Individual fuel economy improvement will vary depending on use, road conditions and other factors.