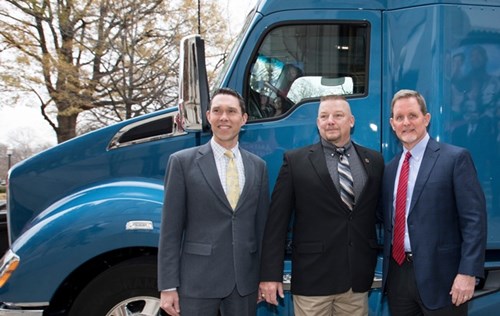 LEAWOOD, Kan., Dec. 20, 2017 ― A driver with Stevens Transport, longtime customer of MHC Kenworth – Dallas, was named the winner of the U.S. Chamber of Commerce’s Hiring Our Heroes Transition Trucking: Driving for Excellence award.

Gregg Softy, a 28-year U.S. Army veteran, received a new Kenworth T680 Advantage truck during a ceremony at the Chamber of Commerce’s Washington, D.C. headquarters. MHC Vice President of Regional Sales Bob Bowden was also in attendance to present a $2,500 gift certificate to use exclusively at MHC Kenworth – Dallas. For the past 26 years, Bowden has worked closely with Stevens Transport to support its business needs.

“This award could not have gone to a more worthy candidate,” Bowden said. “It was an honor to attend the event with Stevens Transport, who shares a rich history of partnership with MHC. Softy has been fully introduced to MHC’s products and services, and has been assured that we will do Whatever It Takes® to support him in his future endeavors.”

Softy is a graduate of the United States Military Academy at West Point and a highly-decorated Army veteran who retired as a lieutenant colonel. In his military career, he served in six overseas deployments, including:

Following his military career, Softy went on to earn an MBA and become a truck driver. He currently leases and drives a truck with a fellow veteran and business partner for their growing company, Hell on Wheels.

“I feel my military career has prepared me for the responsibilities and challenges that come with driving a truck and being within this industry,” Softy said in a video to contest voters. “Trucking, like the military, is a people business. The military has instilled in me the imperative of treating everyone with dignity and respect regardless of position or job.”

An independent committee comprised of individuals from the trucking industry selected three award finalists, all of which work for companies who have longstanding partnerships with MHC. Wayne Roy, a Marine Corps veteran and driver with U.S. Express, as well as Daniel Shonebarger, a Navy veteran and driver with Melton Truck Lines, were runners-up and presented with $10,000 checks.