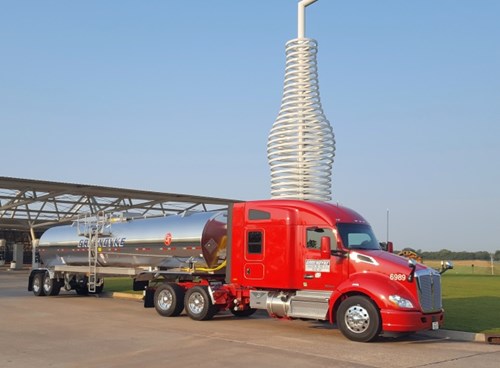 ENID, Okla., July 18, 2018 – Brian Gigoux and other executives at Groendyke Transport knew they would be making a bold move when they reduced the company’s trade-in cycle for its trucks from nine years to five.

But the need to bring on trucks with the newest and latest technologies to enhance driver safety and fuel economy, reduce costs at its maintenance facilities, and attract and retain the industry’s safest drivers compelled the company to take that step.

The key question faced by Groendyke’s executives was: Which truck manufacturer could deliver the highest level of driver comfort, along with the company’s must-have safety equipment, industry leading residual values and reduced operating costs at the end of those five years? After all, a decade later, trucks now cost a lot more than the ones they would replace, Gigoux said. One OEM high on their list was Kenworth, with its on-highway flagship model – the Kenworth T680 in day cab and 76-inch mid-roof sleeper configurations.

“Our average driver has a long tenure with our company and many have driven over a million miles for us alone,” he said. “Keeping these men and women safe is our obligation. Driver acceptance is influenced by a truck that proves to be reliable and allows them to start each trip with confidence that they’ll be able to safely deliver their load on time.”

As the fifth largest motor carrier of bulk commodities serving North America, Groendyke hauls 450,000 loads of chemicals, refined fuels, asphalt components and lubrication oils about 77 million miles annually with a fleet of 900 tractors and 1,400 trailers. Gigoux said the company’s wide distribution network, with 30 terminals spanning across the center of the United States and runs to 49 states and Canada, required a truck manufacturer with a solid dealer network. And since nearly every terminal maintains a full-service maintenance facility, the OEM’s replacement parts support had to be equally up to the fleet’s challenging needs. Not only did Groendyke require an OEM with dealers that could supply captive and proprietary replacement parts to its maintenance facilities, but also fulfill the facilities’ long-term sourcing needs for a higher volume of quality “all-makes” aftermarket parts than the typical fleet.

“We looked at some options. Based on our experience with the Kenworth T800 equipped with earlier versions of the PACCAR MX engine, and our visit to the Kenworth plant in Chillicothe (Ohio), we chose Kenworth and the T680,” Gigoux said. Meeting Groendyke’s safety equipment needs was the price of entry for all of the OEMs. The Kenworth T680 met that need by offering the Bendix ABS-6 Advanced with ESP Stability System, Bendix Wingman Fusion electronic stability program and collision mitigation technology, Bendix ADB22X air disc brakes in all positions, and a tire pressure monitoring system. Groendyke executives’ visits to the Chillicothe plant, and later stops at both the Kenworth plant and PACCAR Parts distribution center in Renton, Washington, helped cinch the deal.

“I’ve been to many truck manufacturing plants over the last 25 years,” Gigoux said. “It was clear to me everyone’s focus on quality on the production line and the Chillicothe plant’s cleanliness was top-shelf. It was an eye-opening experience to talk with the engineers who designed the T680, and the people who build them. When we discussed our company’s needs and concerns for future developments, we were impressed that, in nearly every case, Kenworth’s engineers were already working on T680 refinements and had answers to our questions.”

Following the executives’ tour of the Chillicothe plant, Groendyke began buying Kenworth T680s with day cabs, which are used for local deliveries, and with 76-inch mid-roof sleepers, which are used on longer hauls that move raw products across the United States and into Canada.

Gigoux said an early indication that Groendyke’s executives had made the right choice came about last year, after PACCAR introduced its integrated powertrain. The PACCAR Powertrain, which features a 455-hp PACCAR MX-13 engine, 12-speed PACCAR automated transmission with 1,650 lb-ft of torque and proprietary PACCAR 40K tandem rear axle, gives Groendyke a 2/10 of a mile per gallon improvement in fuel economy over a similarly equipped Kenworth T680, Gigoux noted. With the company’s trucks averaging about 100,000 miles annually, and a current price of $3.17 per gallon for diesel fuel, Groendyke stands to save about $7,000 per truck over a five-year period, he said.

“We’ve been purchasing the PACCAR MX-13 engine with Kenworth models since it was first introduced in the North American market in 2010,” Gigoux said. “The engine has always pulled strong, but got even better with the release of the integrated PACCAR Powertrain with 2017 greenhouse gas emission-compliant MX-13 engines with peak torque lowered to 900 rpm. The new 12-speed PACCAR transmission complements the PACCAR MX-13 very well, and the lower first gear ratio has allowed us to incrementally lower the rear axle ratio to slow the engine down at highway speeds for optimum fuel economy.”

Gigoux said in the past, concerns over how such adjustments might impact the truck’s performance, particularly on routes with mountain grades, have kept the company from taking such bold steps with downspeeding to attain optimum fuel economy. The PACCAR 40K rear axle changed that perception, he added.

“The new PACCAR rear axles are offered with numerous ratio options that have allowed us to really get ‘dialed in’ on our engine speed at top cruising speeds, so we can now work with MHC Kenworth to adjust those ratios appropriately on trucks based on the type of terrain on which they operate,” he said.  “The new rear axles are also lighter weight with some unique fuel savings features such as laser-welded gear sets to reduce oil churn.”

Groendyke is so pleased with the results that the company plans to buy 50 more Kenworth T680s with the integrated PACCAR Powertrain and place them into service by the end of the calendar year, bringing the company’s total count of Kenworth T680s to 185.

“The fact that we have been averaging more than 7 mpg* with the Kenworth T680 with the integrated PACCAR Powertrain certainly makes us happy,” Gigoux added. “But we’re always looking for more. The fact that MHC Kenworth and the engineers at Kenworth work with us to continuously refine our truck specification choices to attain better fuel economy without impacting performance certainly makes us happier.”