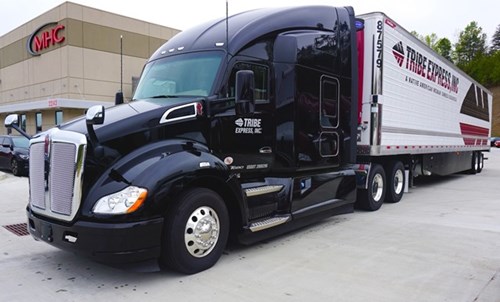 GAINESVILLE, Ga., April 10, 2018 – Tribe Transportation is focused on being one of the top temperature-controlled carriers in the nation. At the heart of the Georgia-based company’s long-haul fleet are 540 Kenworth T680s. But, simply running a leading brand isn’t enough to sustain growth and success.

According to Matt Handte, executive vice president for Tribe Transportation, what the company sells to its clients is value. That means trucks and trailers which showcase dependability and performance, and drivers who have confidence in their equipment.

“We're looking at safety, reliability, aerodynamics, fuel efficiency, reduction of CO2 into the atmosphere and even security,” said Handte. “We want to have the best package on the road.”

Tribe Transportation’s long-standing relationship with Kenworth resulted in the fleet becoming among the first companies to road test PACCAR’s integrated powertrain, which combines the recently introduced PACCAR 12-Speed Automated Transmission with the strength of the PACCAR MX-13 engine and the proprietary PACCAR 40K tandem rear axle.

“We have high expectations, and were very pleased with how the PACCAR powertrain performed,” said Handte. So much so, Tribe subsequently purchased 100 Kenworth T680s with the full powertrain. The T680s, which were purchased through MHC Kenworth – Gainesville, are equipped with 76-inch sleepers and PACCAR MX-13 engines rated at 455 hp and 1,550/1,750 lb-ft of torque.

When Tribe Transportation first began running what PACCAR calls a “pure automated transmission,” there was some hesitation from veteran drivers accustomed to operating a 10-speed automated. But Handte said they soon realized the advantages of the PACCAR transmission, especially considering the company’s average haul throughout the lower 48 states is 1,203 miles.

“After they’d driven across the county line, they would call back and say that they were never getting out of that T680,” said Handte. “They liked the transmission that much.”

Predictive cruise, which uses GPS mapping to assist drivers with gear selection while in cruise control, can deliver as much as a 1.5 percent fuel economy improvement, and also reduces shifting by as much as 20 percent. This is accomplished by leveraging the vehicle’s momentum to reduce fuel consumption on hilly terrain.

“It is continual improvement, and we’re seeing some very significant numbers as a result,” said Handte. “The savings go straight to the bottom line. We run team service to the West Coast, and some of our teams have seen MPGs in the low-9s. It has to do with the entire package – the drivetrain, the driver, and the aerodynamic features.  They are all things we’re using to hit those kinds of numbers.”

Another important improvement is the operation of reverse gearing. The PACCAR Automated Transmission is equipped with a 430-mm (17-inch) clutch with diaphragm springs and cushioned organic facings. These provide even pressure which delivers smoother engagement.

“In the past, there was some hesitation causing some hard pops on the dock plates as you’d back the trailer and try to place it into a door,” said Handte. “The new PACCAR transmission engages much smoother. There’s very little reverse hesitation, and that jerking motion that was sometimes an issue with older automatics is gone.”

According to Handte, less experienced drivers tend to be more at ease operating an automated transmission, especially when dealing with hill stops and going in reverse. The PACCAR transmission has the shifter integrated with the engine brake controls, mounted on the steering column, allowing for more cab room and ease of transition from the driver’s seat to the bunk area. Putting frequently used controls front and center, Handte noted, allows drivers to keep both hands on the steering wheel and their focus on the road.

Tribe Transportation puts so much stock in the T680 with PACCAR components, that after they run them for 36 months, they won’t trade them in. Instead, the plan is to move the units into the company’s owner-operator division (Cherokee National).

“We don’t want to lose company drivers to the owner-operator world, so when and if they have aspirations to become an owner-operator, we give them the opportunity to join our Cherokee National fleet,” said Handte. “Keeping our driver base in a comfortable, spacious, reliable truck has a direct impact on the driver’s overall experience with Tribe, which will produce even higher industry-leading driver retention as it relates to value.

“Kenworth is certainly a driver’s first choice,” said Handte, “and then you throw in these advancements and conveniences, and it’s a whole package that allows us to recruit and retain the drivers that we need to grow our company.”