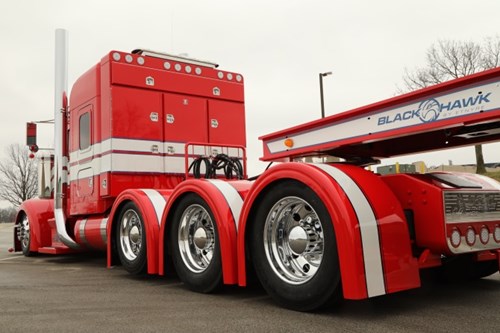 The Top Three Kenworths in Show included two custom built Kenworth W900Ls and a W900. In addition to the trip, the winners received a Kenworth trophy and a $3,000 gift certificate from PACCAR Parts.

“We had an excellent turnout, and there were many impressive Kenworths featured in the PKY Truck Beauty Championship this year,” said Kurt Swihart, Kenworth marketing director. “You could tell that our Top Three Kenworths in the Show winning owners invested a great deal of time and effort to each showcase a Kenworth truck that stood out against the rest of the competition.”

Mark Hollen, owner of Denver Truck Painting Inc., in Denver, Pennsylvania, and his building team spent over 3,000 hours working on the truck in preparation for the championship. Named ‘She Gives Me the Blues,’ the re-built 2014 Kenworth W900L not only earned Hollen’s Kenworth truck a spot among the Top Three Kenworths in Show, but also the People’s Choice Award at MATS.

“The team put a lot of time into this truck, so I’m glad it was well received at MATS,” said Hollen. “I added some unique touches to the truck, like installing a 1980 Kenworth W900A flat dash, something I know no one else would do. Every detail counts in a competition like this.”

As for the trip to the Kenworth Chillicothe Plant, it’ll be the first time Hollen will see the process behind the making of a Kenworth truck. “I’ve wanted to visit a truck manufacturing plant for years and I’ve never had the opportunity until now,” said Hollen. “I look forward to the experience and thank Kenworth for the opportunity.”

Chad and Lisa Berry, owners of Berry Trucking, a fleet based out of Medford, Wisconsin, placed in the Top Three Kenworths in the Show with their 1995 Kenworth W900, named ‘Money for Nothing.’ Since March 2018, the Berrys have spent countless days and many late nights working on the truck so it could be entered into the PKY championship.

“There is a long list of customizations we added to the Kenworth W900, including a new hood, sleeper, interior, and an engine we re-built ourselves,” said Lisa Berry. “Chad and I, along with some family members did all the work on the truck. When you build a truck that you envisioned and put in all the work into, it makes being recognized by Kenworth as one of the Top Three Kenworths that much more rewarding.”

James and Malona Williams, owners of J&L Contracting, a heavy equipment hauler located in Springfield, Missouri, had a successful showing at the PKY Truck Beauty Championship. His 2008 Kenworth W900L – named ‘Never Satisfied’ – with a 2019 Etnyre low boy trailer won the Best of Show – Combo Award, as well as Top Three Kenworths in the Show honors.

“The Kenworth W900L was a fun project for us,” said James Williams. “Many hours went into working on the truck, and it was well worth it. We received numerous positive comments on our W900L at MATS, and the judges of the championship appreciated our truck as well.”

The three winners – accompanied by one guest each – of the all-expenses paid trip will participate in the “Kenworth: The Right Choice” customer event, which opens with a May 22 dinner in Columbus, Ohio. The following day (May 23) is highlighted by their special red-carpet tour of the Kenworth Chillicothe assembly plant. They also will have an opportunity to drive the new Kenworth W990 during the event’s Kenworth truck ride and drive, attend Kenworth T880S and Kenworth T680 walkaround presentations, visit the supplier fair, and listen to informative classroom presentations.