Kenworth T680s Answer the Call of Duty for USA Truck 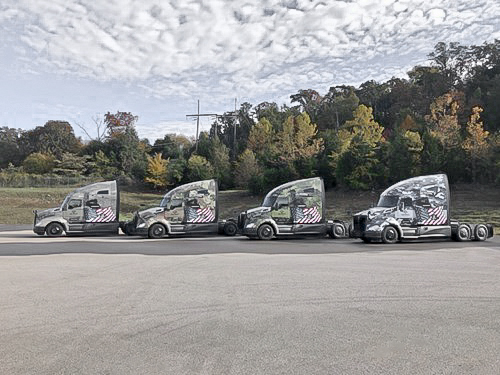 VAN BUREN, Ark., January 24, 2019 – When soldiers go into battle, they rely on their training, experience and equipment to keep them safe and enable them to complete their mission. When the troops from USA Truck roll out, they depend on the Kenworth T680 to keep routes on schedule and their crew of drivers, more than a quarter of which are former military personnel, productive and satisfied with their jobs.

That commitment to duty and service is the foundation of USA Truck Capacity Solutions, started in 1983 by Robert Powell, a former Navy aviator, as Crawford Produce, operating fewer than 10 trucks. Today, with more than 1,600 driving team members, USAT is regarded as one of the nation’s largest over-the-road truckload carriers.

USAT prides itself on being the ‘go to’ provider when customers face challenges in their supply chain. Recognized by the iconic U.S. Air Force star and bars insignia on their doors, USAT provides customized truckload, dedicated contract carriage, intermodal and third-party logistics freight management services to a wide customer base throughout North America.

The Kenworth T680 makes up more than half of the USAT fleet. Since early 2016, the USA Truck division has acquired 625 T680s with 76-inch sleepers through MHC Kenworth - Van Buren.

“Having a reliable truck on the road is very important to our operation. From the standpoint of servicing our customers, it gives us confidence that we're going to be able to handle capacity and meet commitments,” said David Turner, USAT corporate marketing manager. “When you’re on the road, you can’t have your truck break down when you're delivering a load.”

“Kenworth is a key nameplate that drivers gravitate towards,” said Nick Wakefield, director of driver recruiting. “Especially with the Kenworth T680, drivers like the configuration of the cab and how much space it offers. Regardless of a driver’s height, the T680 has a roomy feel and handles exceptionally well. It’s also a truck that drivers think looks cool.

“We pay by the mile,” Wakefield added, “so having dependable trucks helps in recruiting because drivers know they'll be getting a steady paycheck.”

When USAT chooses equipment for its 2,000-tractor fleet, the company looks at a number of factors with build quality and safety (for drivers) being at the top. Overall total cost of ownership is another. Jeff Harris, USAT vice president of maintenance, has been in the trucking industry 30 years, and has a lot of respect for Kenworth and PACCAR products.

“The T680 has a good running history. We’re confident we can get at least a good four years out of them without incurring stepped-up cost-per-mile increases,” Harris said.

Fuel economy is always important to the carrier's bottom line. While the actual numbers are in the "top secret file" at USAT headquarters, they do note that the new Kenworth T680s with 76-inch sleepers, when matched with a 400-hp engine and automated transmission, represents a significant improvement compared to the previous model the company operated.

In terms of added features, USAT specs air-disc brakes to achieve maximum stopping power and reduce its stopping distance. The company also incorporated the Bendix Wingman Fusion collision mitigation system with adaptive cruise control, and Bendix BlindSpotter, a radar-based, side sensor designed to help drivers be aware of obstacles that may be hidden in the blind spots on either side of their truck.

Wakefield pointed out that the automated transmissions are particularly accommodating for drivers coming out of the military who are used to operating simplified Class-B level equipment. “Having a top-of-the-line truck like the Kenworth T680, designed around ease of operation and driver-friendliness, makes for a smooth transition,” he said.

USAT has a long, proud history of supporting our nation’s heroes, and does all it can to show its appreciation for their service. Four of USAT's veteran drivers, each representing a different branch of the military, were awarded military-themed tractors with custom camo wraps and the slogan “Serve, Unite, Advance.”

“When veterans enter into the civilian workforce, they look for opportunities like they had in the military where there was a rally point with a community of like-minded individuals. We want USA Truck to be a rally point,” said Steve Brantley, USAT director of talent acquisition.

In 2017, USAT was recognized among “Most Valuable Employers for Military” by RecruitMilitary, which identifies top civilian employers for military-experienced job seekers.

“We love veterans from a recruiting standpoint because they're resourceful and adapt well to facing challenges and overcoming obstacles,” Brantley said. “The veterans are trained to rely on their equipment, and the beauty of the T680 is that it is reliable and helps them to transition from taking orders to being the captain of their own ship."

Kenworth Truck Company is the manufacturer of The World's Best® heavy and medium duty trucks. Kenworth's website is Kenworth.com. Kenworth is a PACCAR company.