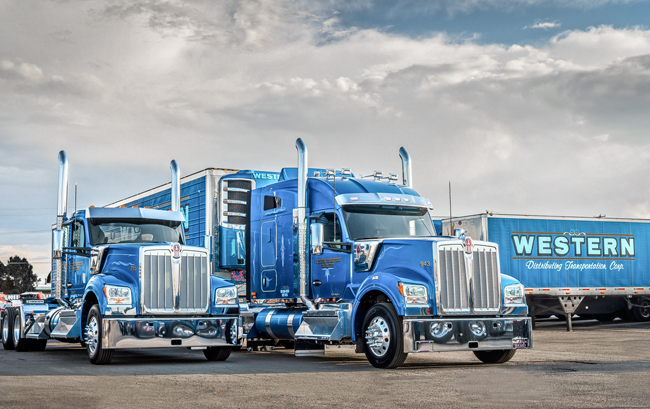 DENVER, July 15, 2019 – When Western Distributing representatives visited Kenworth’s Chillicothe plant in Ohio to take delivery of the very first production W990 in February, drivers at the company’s Denver headquarters anxiously waited for their chance to see the new model.

“We run a fleet of 200 trucks, and all but 10 percent of those trucks are long-hoods. Our drivers, many of who have driven for us for years, appreciate trucks with that traditional look. I believe that has played a major role in keeping our driver retention high,” said Marty Garcia, Western Distributing vice president.  “The Kenworth W990 turned a lot of heads when it rolled up to our headquarters. We had drivers asking if they could be considered to be assigned a W990, even drivers who were not ‘Kenworth guys.’ ”

The six Kenworth W990s, five equipped with 76-inch sleepers and one day cab, purchased by Western Distributing from MHC Kenworth – Denver, operate in the refrigerated division and are driven by the company’s longest tenured drivers.

“We added the Kenworth W990 for our drivers,” said Garcia. “They’ve invested years driving for us, and we wanted to invest in them by providing them with a truck that they would enjoy driving and be able to call ‘their own.’ Between the drivers of the W990s, there is 105 years of driving experience. They’ve earned it.”

While providing a truck with high driver appeal was a key factor in the decision to add Kenworth W990s to its fleet, engine performance also was important.

“Our refrigerated division operates predominately in the Western states. Our headquarters are in the heart of the Rocky Mountains, so our drivers constantly travel over mountain passes and rugged terrain. We needed an engine known to be reliable, coupled with the power required to traverse steep grades. The PACCAR MX-13 meets those requirements,” said Garcia.

For Tom Bogle, who has driven for Western Distributing for nearly 24 years, the W990 sleeper unit provides him plenty of room for his 6-foot-6 frame.

“I couldn’t believe how much room there is in the W990’s cab and sleeper,” said Bogle. “You’d be surprised how much space there is in a 76-inch sleeper when it is designed right. I’ve heard that Kenworth factored in tall drivers when developing the sleeper, and I’m really happy with it.”

Bogle, who was on-hand to receive the first production Kenworth W990 at the Kenworth Chillicothe plant, could hardly wait to start driving his truck. After taking some time to personalize the W990 – adding chrome and a horse emblem to the hood – Bogle began driving his W990 in the spring.

“It was such an honor for me to go with Marty Garcia and Marty Rau (Western Distributing refrigerated division general manager), to Kenworth in Chillicothe,” said Bogle. “Watching the process behind the build of the truck was fascinating. The plant employees were smiling as the truck moved down the line. You could tell they were building a truck that they were truly proud of. It made me that much more excited to start driving the W990.”

A typical trip for Bogle has him delivering beer to California and returning to Denver with fresh produce. “I’m an old school driver, so I love the feel of riding in a long-hood truck, operating a manual transmission,” said Bogle. “It’s safe for me to say the W990 is the best driving truck I’ve ever driven, and I’ve been on the road for a long time. Driving for Western, I’ve always had the pleasure of driving long hoods, and one thing that has blown me away so far is the increased fuel economy I am getting in my W990. My fuel savings are nearly 20 percent compared to the previous truck I was driving.”

Western Distributing’s lone Kenworth W990 day cab operates out of its Denver terminal, delivering beer to Grand Junction and Montrose, Colorado, before returning to Denver with a load of sawdust. Harold Hutton, who has driven for Western Distributing for more than 16 years, started driving regionally five years ago after driving long haul for years.

As a regional driver in Colorado, Hutton spends much of his time climbing mountain passes along his route. Operating equipment that can handle the rugged terrain he encounters is essential, and the Kenworth W990 he drives is proving its worth, according to Hutton.

“I’m very pleased with the PACCAR MX-13 engine and the way the W990 has handled for me so far,” said Hutton. “This engine is outperforming and providing me with more power than the engine I had in my previous truck. When you’re navigating steep terrain, naturally an engine is going to be working hard, and in most cases, it’s going to be noisy. That hasn’t been the case with this engine. The quieter engine, combined with the comfortable cab has improved my overall experience on the road.”

While Hutton drives at night, that does not mean he hasn’t received a lot of interest from other drivers out on the road. In fact, Hutton constantly is asked for his permission to take photos of his W990.

“The W990 hasn’t been out on the road all that long, but it seems like I’m getting comments from drivers and requests for photos on a nightly basis,” said Hutton. “The majority of the other drivers are pleased with the look of the truck. I couldn’t agree more, the W990 is a beautiful truck.”

As for the other drivers in Western Distributing’s fleet, they’ll have to wait their turn for the chance to drive a Kenworth W990.

“This is my truck, and no one else is allowed to drive it,” smiled Hutton. “I feel fortunate to be driving a new Kenworth W990 and I appreciate Western Distributing for putting me in one.”