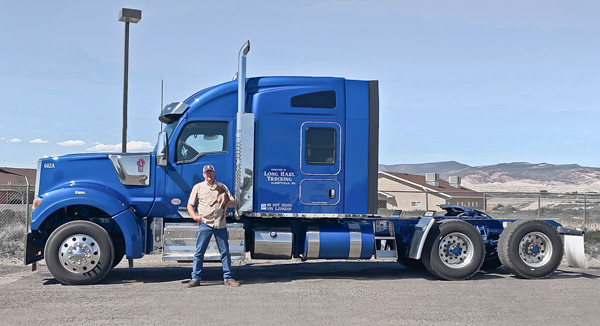 MONTROSE, Colo., July 22, 2019 – When the Kenworth W990 was unveiled in Las Vegas last fall, it didn’t take long for Larry Martin to jump at the chance of owning Kenworth’s new long hood with its traditional design.

“This was the truck I had been waiting for,” said Martin. “As soon as the pictures and videos came out after its release, I was sold. I went right to Jordan Bogue (new truck salesman), who I’ve worked with for several years at MHC Kenworth – Grand Junction, to write up a contract and off we went.”

Martin, an owner-operator with more than 2.5 million miles logged over the course of his career, delivers machinery, robotics, glass and other industrial equipment in his trailer to all 48 continental states. He is on contract with Long Haul Trucking, based out of Albertville, Minnesota.

Prior to becoming an independent contractor, Martin spent 14 years driving for fleets, both locally and long haul, which gave him the experience he needed to make the leap to owning his own truck.

“It was a big decision for me to take that next step and take on all the responsibility that goes with being an owner-operator,” said Martin. “It hasn’t always been easy, but I was determined to become more financially stable, and I wanted the freedom to set my own schedule. That was 15 years ago, and I couldn’t be happier with where I’m at in my career.”

Over the course of Martin’s 29 years of professional driving, Martin has owned or driven a truck produced by nearly every heavy duty truck manufacturer. But, Martin’s willingness to experiment with truck makes ended five years ago when he purchased an aerodynamic Kenworth model – equipped with a PACCAR MX-13 engine.

“I’ve driven a lot of truck makes over the course of my career,” said Martin. “I’ve never been tied to one make, but that all changed with my first Kenworth truck purchase. It was a combination of a quality truck backed by great service. MHC Kenworth – Grand Junction has been my go-to dealer for five years now, and they provide me with top-of-the-line service. I’m just a single truck operator, but it seems like they go out of their way to get me back on the road with minimal downtime. MHC hands down consistently gives me the best service I’ve received in my career. They take care of me, and when it came time to look into buying a new truck, it was a no-brainer to give Kenworth a hard look.”

For Martin, his reasoning behind purchasing a Kenworth W990 went far beyond the appearance of the truck. As an owner-operator, Martin said he needed a high-performing and reliable truck to keep maintenance costs low and minimize downtime. Many of the deliveries Martin completes are time-sensitive, so it’s crucial for him to operate dependable equipment.

“Before I purchased my first Kenworth, I spent a lot of time researching engines, which led me to the PACCAR MX-13. That was time well spent. I’ve been so impressed with its reliability and performance,” said Martin. “For my next truck, I knew I wanted a new, modern long hood that featured the PACCAR MX-13 engine. When the W990 was released last year, I knew that was the truck for me.”

“On top of Kenworth coming out with a truck that fit the specifications I was looking for, my relationship with MHC Kenworth really made me comfortable with my decision,” said Martin. “In my time as a Kenworth truck owner, if there is an update, or fix that needs to be made, MHC will take care of it when it’s most convenient for my schedule, and well before a potential problem occurs. In this industry, minimizing downtime is essential, and MHC Kenworth without a doubt helps keep my Kenworth on the road, and out of the shop.”

Since taking delivery of the truck in May, Martin personalized his W990 by adding panel lights under the cab and sleeper and stripes to the fuel tanks. He expects he will put on 130,000 miles in his first year of operating his new truck. On average, Martin will spend three weeks at a time on the road, before returning home to Montrose, Colorado for a break.

“The W990 has exceeded my expectations. This is easily the best truck I’ve ever driven. The PACCAR MX-13 engine is performing flawlessly,” said Martin. “The W990’s ride is incredibly smooth. I frequently travel through a section of highway in Pennsylvania that is probably the roughest stretch of road I’ve driven. It’s typically uncomfortable, but the W990 passes through with ease. I’ve never been more comfortable in a truck.”

To accommodate for extended periods on the road, Martin added the midnight black W990 Limited Edition interior, plus the premium Kenworth GT703 seats, and the 180-degreee swivel passenger seat for added comfort when parked. Martin, who stands 6-foot-3, is finding the layout of the cab and sleeper accommodating.

“I can’t get over the spaciousness of the cab and sleeper,” said Martin. “I can stand straight up from my driver’s seat and there is plenty of clearance. The engineers behind the cab did a great job in designing a layout that would accommodate a driver’s needs. I’ve never felt more at home in my truck. There’s no need for me to bother booking hotel rooms.”

On the road, Martin has received a lot of feedback from drivers on the truck. Some have even asked for tours of the sleeper, which Martin gladly provides.

“I’ve received nothing but positive comments about the W990,” said Martin. “There was even a driver who came up to me that originally wasn’t so sure about the Kenworth W990, but when he saw mine and took a tour of the sleeper, he completely changed his mind. He told me his next truck would be a W990 – that’s an experience I won’t forget. Hearing a comment like that solidifies my decision in going with the W990.”

For Martin, life on the road has never been better, and he has no plans of calling it a career anytime soon.

“I don’t view truck driving as just a career, it’s my hobby. I’ve been driving for a long time and I will continue to keep putting on miles. Who knows when my time is up on the road, but one thing is for certain, as long as I’m on the road, I’ll be driving a Kenworth.”