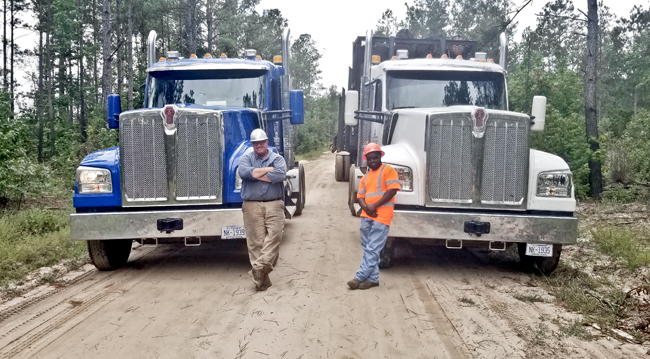 Bobby Goodson and his crew were the stars of the Discovery Channel's hit reality show, Swamp Loggers. The show, which ran for four seasons, chronicled the constant difficulties encountered with bad weather, poor road conditions, and equipment failures, as well as uncertainties concerning lumber buyers, landowners and sawmills.

“Logging is a handful in itself. When it became difficult to get contract trucks, I knew I needed to buy trucks that would lure drivers to our company, and that could handle and deal with extreme conditions,” Goodson said.

Goodson previously augmented his contract haulers with a small fleet of Kenworth W900s, which he shared with his son Justin. He has since upgraded to the Kenworth W990, and took possession of six of the new W990 model this past spring from MHC Kenworth – Wilmington.

“A friend of mine had some W990s, and every time I saw them I said to myself, ‘the next time I buy trucks that’s what I’m going to get,’” Goodson said.

The Kenworth W990 takes its styling cues from the classic long-hood appearance of the W900, and while it’s a star on the highway, it’s just as capable in off-road applications. Goodson certainly puts it through its paces. The “roads,” if you can call them such, that Goodson's trucks travel are a bit more challenging that the average logging road in the woods. Swampland isn’t ideal for hauling on, and Goodson’s crew often have to improvise their own roads. Sometimes the regular roads end a mile or so short of the landing.

Goodson spec’d his Kenworth W990s with the Eaton UltraShift PLUS 13-speed heavy duty vocational series automated transmission for the challenging conditions. “The W990s get into some terrain and muck that are terrible on drivelines. That’s one reason we went with the automated transmission,” Goodson pointed out. “My thinking was that if we had to hire new drivers, it would be less abuse on the truck teaching somebody new to operate the automated.”

Most importantly, Goodson said, the automated transmission is, in a word, forgiving. "With a manual transmission, on a sandy or spongy road, and you've got 90,000 pounds on the truck, if you get it in the wrong gear, that’s about it. With the automated, you can manually select the gear you want to be in and still keep the rpms up without going too fast so that you don’t gear down when you hit a soft spot.”

With the hardwood market forcing Goodson’s trucks to make longer hauls, driver comfort was another factor in selecting the Kenworth W990 with its wider and quieter 2.1-meter cab compared to the 1.9-meter cab of the W900. Goodson also spec’d the new W990 model with the 40-inch sleeper, which includes a 78-inch by 24-inch liftable bunk, 6.5-inch thick foam mattress, and 22 cubic feet of storage.

“You’ve got to give the driver every advantage possible,” Goodson said. “The extra room in the cab gives drivers plenty of space to store their gear. And, if the drivers get to the woods early or get stuck in line at the mill, they can jump in the back and take a little nap ‘till it’s time to go.

For those that tuned in to Swamp Loggers, it might have looked like Goodson’s crews were face-to-face with trouble every day. Much of the drama on the show, like equipment getting bogged down in the muck, according to Goodson, was played up a bit for entertainment sake.

“In our environment, we get stuck all the time,” he said. “It’s no big deal.”

All in all, Goodson said Swamp Loggers was a good experience because it gave normal folks a glimpse into a job they know little about.

“Most people don't have any idea what all is involved with logging – I guess they think you just cut a tree down and put it on a truck. They don't realize all the logistical problems,” Goodson said. “There's about 10 to 15 things that have to line up right for you to make a living in the woods.

“I don’t care what kind of logger you are, if you don't get the wood across the scales at the mill, you don't get paid,” he added. “You’ve got to have trucks and drivers, and if you buy the best trucks on the road, you attract the best drivers. The W990 is a ‘driver's truck’ and the best part for me, is that I know it’s going to do the job."