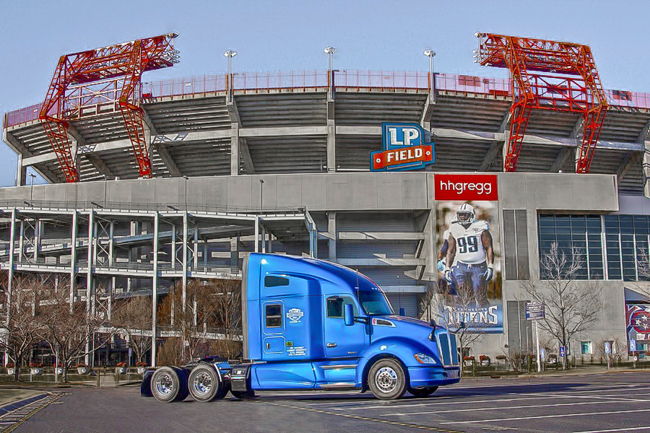 MOUNTAIN HOME, Ark., Oct. 3, 2019 – Excellence in Motion. It’s a simple mantra, but it says everything about the way KARR Transportation operates its business and the equipment in its fleet.

“We’re all about hard work, and if we come in and get the job done and do things the right way, then everything works like greased wheel,” said KARR Transportation president and CEO Al Beers, who runs 55 Kenworth T680s as a full-service refrigerated carrier serving all 48 states and Canada.

"I want the best of the best, and I've always looked at Kenworth as being the best equipment out there,” said Beers, who has been a Kenworth customer since 2013 when Brad Creager, a personal friend and salesman at MHC Kenworth – Nashville, talked him into testing out the Kenworth T680. KARR Transportation soon became an early adopter of Kenworth’s on-highway flagship model when the company took a delivery of 20 T680s in 2014. Before that, KARR Transportation operated a mixed fleet, which Beers said lacked reliability.

“One of the main selling points we emphasize to our customers is the reliability of our equipment. A major part of that is the backing we have from Kenworth,” Beers said. “Our previous trucks were getting old and had a lot of downtime. One customer told me that if we put those trucks back on the road they’d get somebody else to cover their loads.”

That was a wake-up call for Beers, who has added 27 Kenworth T680s over the past three years. Starting last fall, KARR Transportation began spec’ing the PACCAR Powertrain featuring the PACCAR MX-13 455 hp multi-torque engine, PACCAR 12-speed automated transmission, and PACCAR 40K rear tandem axles. The company’s latest T680s are equipped with a 76-inch sleeper, which includes a comfortable liftable lower bunk and stowable upper bunk, TV installation package, drawer-style refrigerator/freezer. The cab features the comfortable Kenworth GT702 highback seat with Ultraleather® material and air-ride suspension, and a passenger seat that can swivel 180 degrees when the T680 is parked.

Prior to getting into trucking, Beers had a career that took him “above” the road, piloting charter jets. Many of his clients were celebrities, and he also was the pilot for a professional basketball team on their road trips.

Following the attacks on 9/11, faith and trust in flying was at an all-time low and security restrictions were challenging for passengers and pilots alike, so Beers put his feet back on the ground. He had been a part-time owner-operator since 1982, and had grown up around the trucking industry. His father drove reefers, and his grandfather transported beer between St. Louis and Chicago. In the Kenworth T680, Beers found a truck that was a perfect fit for his operation.

“First of all the T680’s turning radius and the ability to get into tighter places is fantastic even with a big sleeper,” Beers explained. “A lot of our customers are smaller mom & pop produce houses and actual farms that aren't really set up for trucks and trailers. Prior to our T680s, we ran mostly extended hood trucks, so having the ability to get the truck into and out of places you normally wouldn’t go, has made a huge difference.

“The visibility on the Kenworth T680 is phenomenal too,” Beers added. “It's also a comfortable ride. I drive one myself on occasion, and it makes the workload a lot easier.”

When it came to dollars and sense, Beers said fuel mileage and engine reliability make a huge impact. They’re the two biggest reasons why Beers went with the PACCAR MX-13 engine. “PACCAR stands behind their warranty and we're seeing phenomenal returns on fuel mileage,” Beers said. “As we’ve become more familiar with the trucks, we've been able to achieve miles per gallon in the 9 to 9.5 range*. Before we switched to Kenworth, we were getting 6.2 mpg company-wide.”

The KARR Transportation fleet is a 50/50 split between automated and manual transmissions. Beers sees automated as a convenience for drivers and an advantage for the mechanics.

"Having a computer-controlled clutch verses one that’s manually controlled by the driver, who might not be as smooth with shifting, creates less maintenance,” Beers said. “The biggest factor was lessening the fatigue factor for drivers. Our industry is getting older, so everything you can do to make the driver's job easier, benefits your ability to attract and retain better drivers."

With every truck in the KARR fleet carrying the Kenworth badge, shop time is dramatically reduced. “Our parts inventory is very low compared to fleets with multiple varieties of trucks,” Beers said.

The oldest trucks in KARR’s fleet are 2016 models. The strategy is to run them until about 450,000 miles, and then either trade them in or offer them for sale to the company drivers who want a dependable truck as they switch over to becoming an owner-operator.

“We’ve done really well when it comes to resale value. Historically, we’ve seen at least a 30 percent return on our initial investment,” Beers said. “The Kenworth T680s  are so well built, and backed by a solid maintenance program, that the drivers know they are in excellent condition and will serve them well for years to come."

Beers saw first-hand the dedication that Kenworth puts into each new truck that rolls off the line when he visited the Kenworth assembly plant in Chillicothe, Ohio.

“I got to speak with many of the people on the line, and they sure do put their pride into building the trucks,” he said. “It is very impressive to see what Kenworth goes through in order to make an outstanding truck.

“One of my drivers said it best: ‘Al buys us the best equipment and because of that we’re proud to do our job,’ ” Beers remarked.

“You can't just sit around and wait for things to happen; you have to make them happen, and that goes for working with the best equipment,” Beers added. “Kenworth has helped us grow into the company we want to be."