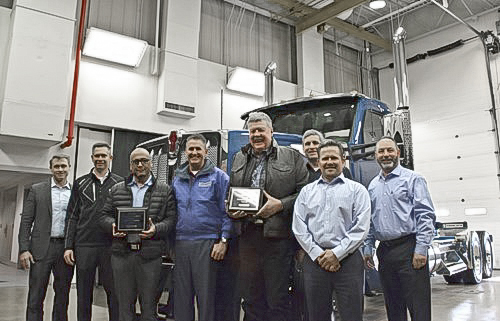 CHILLICOTHE, Ohio, February 15, 2019 – For Tom Bogle, his recent trip to the Kenworth manufacturing plant was something he’ll never forget.

As a driver with more than 30 years and nearly 5 million miles, he was invited to represent the drivers of Western Distributing in taking delivery of the first production Kenworth W990.  He joined Western Distributing’s Marty Garcia, vice president, and Marty Rau, general manager of the company’s refrigerated division, for the event with employees at the Kenworth manufacturing plant in Chillicothe, Ohio.

“It was only right that Tom join us for the ceremony,” said Marty Garcia. “The reason we purchased Kenworth W990s – five sleeper units and one day cab – was for our drivers. Tom’s been with us since October 1996. We’re a company that differentiates itself by the trucks we operate. We’re a fleet of 200 trucks and all but 10 percent are long-hood traditional trucks. The others are aerodynamic models. We were excited to be the first customer to receive a production W990. It seemed like the whole town of Chillicothe came out to see us take delivery.”

Providing the keys – and a plaque signifying the delivery of the first production W990 – to Western Distributing were Kevin Baney, Kenworth assistant general manager of sales and marketing; and Rod Spencer, Kenworth Chillicothe plant manager. The W990s were purchased through MHC Kenworth – Denver, which was represented at the event by Josh Schwartz, MHC Kenworth vice president; and Bill Persichette, new truck sales manager for MHC Kenworth – Denver.

“Western Distributing knows that drivers are the backbone of our industry, and the way it runs its business with a driver-first mentality can’t be understated,” said Baney. “They’re the perfect customer to take delivery of the first production W990 – The Driver’s Truck. It’s a truck totally designed with the driver in mind; a truck that we know will make the Western Distributing drivers smile.”

While Bogle was handed the set of keys for the first W990 day cab – which will be used for regional deliveries around the Denver area – later in the day he, Garcia and Rau were given a plant tour where they saw Western Distributing’s W990s equipped with 76-inch sleepers being built. “I was able to sign the back panel of my assigned W990 while the truck was being assembled,” said Bogle with a grin. “I’ll have my own autographed truck to drive in a few weeks. I can’t wait.”

According to Bogle, the attention to detail in the build, and the enthusiasm from the Chillicothe employees caught his attention. “Everyone had a smile on their face,” he said. “I thought it would take six or seven days to build a truck, but these workers were able to build a truck from start to finish in less than a day. It was so well-orchestrated. I learned a lot.”

According to Garcia, the recipe with its long-hood conventionals is one that has made the fleet’s driver turnover virtually non-existent. “Eighty percent of our drivers never leave,” he said.

Garcia said the company does the initial spec’ing of its trucks, “and on the W990s, we’re putting in the PACCAR MX-13 engine rated at 510 hp. We’ve been running the PACCAR engine since they first came out and have had great success. We wouldn’t want a truck without it. We’re also running 18-speed transmissions, something our long tenured drivers really like. From there, we let each driver select how they’d like their truck spec’d – the chrome options, light bars, visors and air horns, for example. Inside, they can pick the number of bunks they’d like, plus the color of their trim package and other amenities.”

“I’m an old school driver,” chimed in Bogle. “I’ve always liked the look of the W900 and have driven them in the past. But, the added room, especially between the seats, with the W990 is just great. I’m a big guy, so the added space is what I really like – besides the look of the truck. I think it’s also great how, when the truck is parked, the passenger seat can swivel around to the sleeper. I also like the rotating table. I’m just chomping at the bit to start driving the Kenworth W990.”

Kenworth Truck Company is the manufacturer of The World’s Best® heavy and medium duty trucks. Kenworth's Internet home page is at Kenworth.com. Kenworth is a PACCAR company.