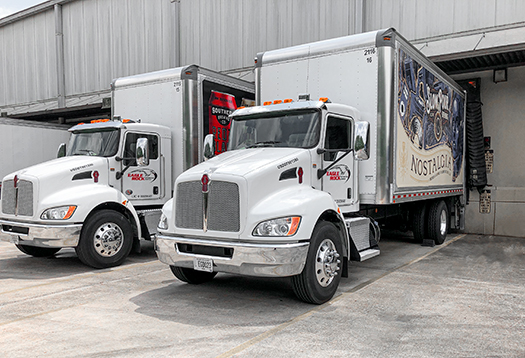 NORCROSS, Ga., Aug. 11, 2020 – When it comes to beer and beverage distribution, one thing is consistent. There is always demand.

“In good times and bad, beverage consumption always seems to be stable,” said Keith Palmer, Eagle Rock Distribution’s fleet manager. “Our distribution changed a bit due to the current climate. We had a drop in restaurant and bar deliveries, but an increase in demand at grocery, convenience, and big box stores. So, our volume is about the same.”

With a fleet of 97 trucks – a combination of box, side-load straight trucks, and tractor-trailers, Eagle Rock has been a mainstay for beverage distribution in Atlanta and outlying areas since 1930, first delivering non-alcoholic beer and Dry Ginger Ale during Prohibition. It utilizes mostly Kenworth T270 and T370 medium duty trucks purchased through MHC Kenworth - Atlanta.

Today, it’s a well-rounded business. The company delivers beer, wine and spirits throughout the state, along with non-alcoholic beverages. “But beer sales represent 90 percent of our sales and we have distribution in 19 counties, and service more than 5,000 accounts,” said Palmer.

According to Palmer, the company is moving away from using side-door beer trucks and instead going with box trucks with 20 and 22-foot bodies and liftgates. “Those are all Kenworth T270s and we have 22 of those,” he said. “These are single driver operations and since we don’t need a CDL driver behind the wheel, it opens up who we have operate the trucks. The driver typically delivers 400 to 500 cases a day and makes five to seven stops. On heavy weekends and holidays, the driver might need to go back to our distribution center to re-load, but typically it’s one trailer load per day.”

The beer is distributed at convenience stores, grocery stores, restaurants and bars, “and the driver is responsible for delivering, rotating and merchandising the product,” said Palmer. “So there’s more to it than just driving a truck.”

The company runs 66 medium duty tractors, including Kenworth T370 single and tandem axle tractors in its bulk hauling beverage operation. Using primarily 36 and 40-foot trailers, along with some 48-foot trailers, the company delivers to big box stores, high-volume grocery stores, plus delivers to Calhoun – the company’s other distribution center in northern Georgia, in a cross-dock operation. From Calhoun, beverages are parceled for box truck deliveries.

The company began using Kenworth medium duty trucks in 2015 and according to Palmer, it’s been a great match. “The quality of the cab and the durability of the truck helps set Kenworth apart from our other trucks, and it’s why they’ve become our truck of choice,” he said. “We have very little turnover and we know the drivers like the truck – the comfort and the visibility is outstanding. The Kenworths also have a very good turning radius, which is important in our operation.”

Palmer said the company typically keeps its power units for seven to 10 years, and image is an important component to their trucks, as it is for most beverage haulers. “Part of our marketing is promoting the brands we distribute,” he said. “The trucks have to convey the right message of quality, and the Kenworths certainly do.”

From an operational standpoint, Palmer said he’s been pleased with the fuel economy, “which is better than the other trucks we run. And it’s great working with MHC Kenworth - Atlanta and Byron Franklin, our salesperson. He’s really good on specs. He takes the time to analyze our operation and routes and then makes suggestions on how to build a better truck for us. He’s been a great resource.”

Most of the Kenworths are powered by the PACCAR PX-9 engine, rated at 260 hp, and are driven through Allison automatic transmissions. “That combination gives us plenty of power and a smooth drivetrain,” said Palmer.