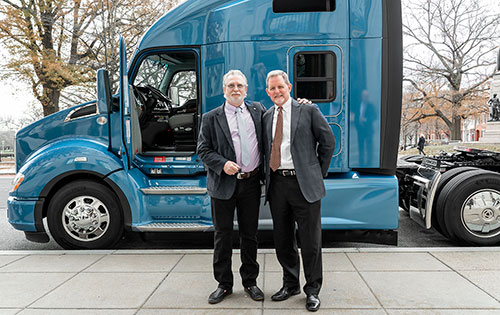 WASHINGTON, D.C., Dec. 20, 2021 – A distinguished veteran with 22 years of combined service in the U.S. Army and Army Reserves received the annual “Transition Trucking: Driving for Excellence” award during a special ceremony held at the U.S. Chamber of Commerce Foundation in Washington, D.C.

For the sixth consecutive year, Kenworth teamed with the FASTPORT Trucking Track Mentoring Program and the U.S. Chamber of Commerce Foundation’s Hiring our Heroes Program to find America’s top rookie military veteran who made the successful transition from active duty to driving for a commercial fleet.

During the ceremony, professional truck driver Jimmy Reddell of Stevens Transport received the keys to a Kenworth T680, the top award in the recognition program. The T680 is equipped with a 76-inch sleeper and features the complete PACCAR Powertrain with an MX-13 engine, TX-12 automated transmission, and DX-40 tandem rear axles.

Reddell entered the trucking industry after he retired from the U.S. Army. Shortly after earning his CDL in 2020, he hired on with Stevens Transport. Reddell recently became an independent contractor through the Stevens Transport Contractor Division, where he currently leases a truck.

“This is certainly a special moment for me. I’m very honored to receive the 2021 Transition Trucking award out of all the deserving veterans nominated,” said Reddell. “Thanks to Stevens Transport and Angela Horowitz (the company’s vice president of administration and driver resources) for nominating me. Also special thanks to Hiring Our Heroes, FASTPORT and Kenworth for their support of veterans making the transition into the trucking industry. I can’t wait to get the Kenworth T680 out on the road.”

“It was an honor to present Jimmy Reddell with the keys to the Kenworth T680 on behalf of Kenworth and our employees. We thank him for his long military service to our country, and wish him all the best in his trucking career,” said Genevieve Bekkerus, Kenworth director of marketing.

“We are honored to recognize Jimmy Riddell, a 22-year Army veteran, for his service to the country and commitment to excellence in the transportation industry. Kenworth's tremendous contribution of a T680 will ensure Jimmy’s continued success as an owner operator,” said Eric Eversole, president of Hiring Our Heroes.”

“Jimmy Reddell's accomplished military career instilled attention to detail, punctuality, discipline and keen sense of urgency that have helped him to be successful as a professional truck driver," said Brad Bentley, FASTPORT president. “Jimmy has a great support network at Stevens Transport to begin his civilian career, and I know he will be a great ambassador for our industry moving forward.”

Under the Transition Trucking: Driving for Excellence program, runner-ups James C. Rose (U.S. Marines/Prime Inc.) and Christopher Slindell (U.S. Army/Knight Transportation) were each awarded with a check for $10,000.

The top driver was determined by an expert panel of judges. To qualify, drivers had to be nominated by their motor carrier and meet three eligibility requirements:
-- Must have been active military or member of the National Guard or Reserve.
-- Graduated from PTDI-certified, NAPFTDS or CVTA member driver training school, with a valid CDL.
-- First hired in a trucking position between January 1, 2020 and July 31, 2021.