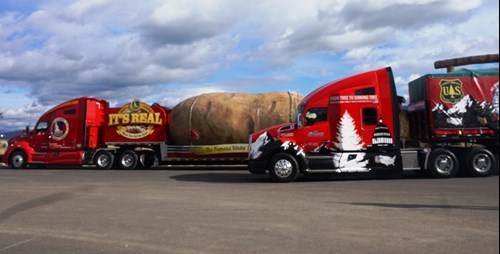 ON THE ROAD WITH U.S. CAPITOL CHRISTMAS TREE TOUR, Nov. 21, 2016 – What exactly would you load on a 6-ton, 28-foot replica of an Idaho russet potato? Since the Big Idaho(R) Potato Truck is accompanying the U.S. Capitol Christmas Tree for much of its 4,000-mile journey from the Payette National Forest to the West Lawn of the U.S. Capitol, the red Kenworth T680 with 76-inch sleeper and PACCAR MX-13 engine has been called on to carry commemorative 2016 Capitol Christmas Tree Tour ornaments. The ornaments will be sold at tour stops along the way, with proceeds benefitting various organizations that encourage youth to spend time outdoors, including Payette Children’s Forest.

The Kenworth T680 Big Idaho Potato Truck hauls the Idaho russet potato replica with a painted polymerized concrete skin over a steel frame bolted onto a 52-foot aluminum low-boy trailer custom built by Boise-based Western Trailers. The Big Idaho Potato Truck was created in 2012 by the Idaho Potato Commission (www.bigidahopotato.com/the-truck) in celebration of its 75th anniversary. While the commission originally intended for the truck to tour the country for one year, the Big Idaho Potato became such a huge hit, the commission decided to continue the tour indefinitely due to popular demand and the publicity it still continues to generate everywhere it goes. The T680 is leased from the Kenworth Sales Co. - PacLease franchise in Boise under a full-service lease.

For Larry Bathe, the driver of the Big Idaho Potato Truck, the ornaments are certainly not the biggest load he’s ever hauled. When he’s not on tour with the Big Idaho Potato during the winter months, Bathe drives a Kenworth T680 hauling liquid methane for Pocatello, Idaho-based Reed Hurst Trucking.

“Every year I have seen the lighting of the U.S. Capitol Christmas Tree by the Speaker of the House on the news,” Bathe said. “But I never really gave much thought as to how they get that tall Christmas tree to the U.S. Capitol. I certainly know now.”

This year, Bathe is getting a driver seat view to the hauling of the U.S. Capitol Christmas Tree, an 80-foot Englemann Spruce, as it travels from the kick-off celebration in McCall, Idaho, 120 miles north of Boise, to Paducah, Kentucky.

For the first two weeks of November, the Big Idaho Potato and the U.S. Capitol Christmas Tree crisscrossed Idaho before heading south to Colorado and then eastward to Washington, D.C. The Big Idaho Potato Truck continues with the tour until it reaches Paducah, Kentucky, on Nov. 22, when it leaves to take part in other various holiday events while the Capitol Christmas Tree continues on its way to D.C.

“I am so happy to be able to drive the Big Idaho Potato Truck on this tour,” said Bathe. “To see all of the people coming out to watch the tree as it passes through their towns is a reminder of what the tree is all about. It brings us all a sense of community and gives us something to celebrate. And the fact that I get to do this in a Kenworth T680 makes it even better.

“Over the last 30 years I have driven many different trucks, but Kenworth is my favorite hands down, and I really like the PACCAR MX-13 engine under the hood,” Bathe said. “It’s quiet, offers good power to smoothly get up and over mountain passes, and the engine brake allows me to comfortably come down the other side.”

Bathe, who started driving trucks in 1994 after serving in the U.S. military, is part of a three-man team who call themselves the “Spud Studs and Larry.” Generally, the three men travel from community event to community event while on tour, one in the passenger seat and the other on the sleeper bunk while Bathe drives. So, during the day, they do make use of all the driver-friendly amenities of the T680’s 76-inch sleeper, including each 32-inch by 80-inch premium coil mattress on the top and bottom bunks and a drawer-style refrigerator/freezer, he said. At night, they sleep in motel rooms.

Bathe said having two team members – Ellis Nanney and Adam Branstetter – gives him an opportunity to take a break and relax immediately after a driving shift. It also makes it easier for the team to divide up the work after they arrive at each stop – one guy’s running the camera or taking photos while the other two mingle and answer questions, he added.

“While Larry’s driving, Ellis (Nanney) and I are able to catch some Zs on those comfortable mattresses,” said team member Adam Branstetter. “The truck’s that quiet. We can also use the fold-out table to do a lot of our planning and media work while on the road.”