Winner To Receive Kenworth T680 in ‘Driving for Excellence Award’ 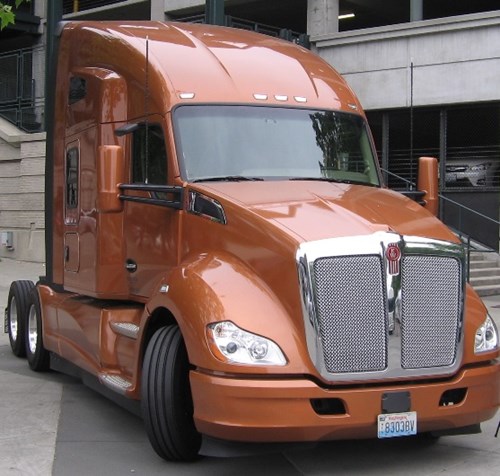 “It was a very difficult choice to narrow our group of 10 finalists down to three,” said Brad Bentley, president of FASTPORT. “We have an elite group of drivers and we are in awe as to what each has accomplished, both in their military careers and as professional truck drivers.”

The list will now narrow to one winner in the U.S. Chamber of Commerce Foundation’s Hiring our Heroes Program, which is being conducted in partnership with FASTPORT.  The winner will be announced December 16 and will receive a fully-loaded Kenworth T680 provided by the Kenworth Truck Company, equipped with a 76-inch sleeper and a PACCAR MX-13 engine.

According to Bentley, the public will be able to learn more about each of the three finalists via driver videos on the Hiring America website (http://hiringamerica.net/) before selecting who they think should be the ultimate winner.  The videos will be posted on September 26.

Drivers were nominated by trucking companies that made a hiring commitment and pledge to hire veterans on www.truckingtrack.org  or, by members of the  National Association of Publically Funded Truck Driving Schools, or Commercial Vehicle Training Association-member school.

“The caliber and professionalism of all those who were nominated in the award program is inspiring. One of these three deserving candidates will drive away in the ultimate ‘Driver’s Truck’ – the Kenworth T680,” said Jason Skoog, Kenworth’s assistant general manager for sales and marketing. “We truly appreciate the service and sacrifices of our military veterans and it is important recognition for the trucking industry to provide career opportunities for our veterans when they transition out of the military.”

According to Bentley, each of the three finalists has brought a ‘can-do’ attitude and level of commitment and professionalism to their trucking companies.  “That was very evident in the passion each company relayed in their letters of recommendation,” Bentley said. “And, really, it should come as no surprise. Military veterans are hard-wired for success in trucking. They are mission-oriented, understand the value of training, and are used to working in changing environments.”

Prior to entering the trucking industry, finalist Kevin Scott served as a sergeant, and was a 15 Tango Blackhawk helicopter mechanic and crew chief.

"The military gave me the discipline within myself in order to be successful with this career; every load is almost like a time-sensitive mission, and you cannot be late for a mission,” said Scott. ”It also taught me to take pride in whatever task I might engage in, whether it is a simple task or major task."

“I am proud to have Kevin Scott on my team,” said Josh Perry, safety manager at TMC Transportation, in his letter of recommendation. “He does a phenomenal job from a safety standpoint and is never afraid to call and double-check his work. He’s always above and beyond in his securement. I look forward to Kevin having a successful career here, no matter what the capacity that may be in. He has a bright future at TMC and in the trucking industry in general.”

Russell Hardy, a driver for Trimac Transportation, served in the Navy and Army during his 20-year military career. “Overall, the military is a regimented and disciplined life in almost all aspects,” said Hardy. “Timeliness and deadlines are huge in the military. So, too, are the needs in the life of a trucking-industry professional. The military prepared me for a career in the civilian world by instilling a whatever-it-takes work ethic.”

“Russell joined our team in July 2015 as we launched our military hiring program,” said Michael Ortiz, regional recruiter for Trimac. “He has progressed into Trimac’s Elite Driver program that has become just like a “special forces” unit to help make capacity more available, capitalize on market conditions, and initiate start-up operations and campaigns as necessary.”

Troy Davidson joined the Navy out of high school, and became a jet engine mechanic.  “I remember back in my youth, I liked big trucks,” said Davidson. “I wanted to be a service member for my country as well, which the trucking industry inspired me to do.  It’s also a way to see what beauty this awesome U.S.A. has to offer, and had it not been for me joining the industry, I probably would not have been able to see it.”

“Troy serves as a mentor to his younger co-driver, sharing valuable information about his life, as well as the industry,” said Ron Hodge, south regional manager – field recruiter for Werner Enterprises. “Troy’s nomination for the Driving for Excellence Award comes easy as his acts of generosity come natural and not because he is looking to be recognized. Werner Enterprises is honored to have Troy as part of the family and I know he will continue to excel.”